DOMENICO AGUSTA  -  A Lifetime among Aeroplanes

Domenico Agusta was born in Palermo on February 28, 1907. But at the early age of 6 years he followed his father Giovanni northwards: his father Giovanni was following an all-commanding call to pioneer in aviation.
In 1907, the same year Domenico was born, at Capua his father had tried out an aeroplane he had built himself. Since infant Italian aviation was being formed on the Malpensa moor, in the triangle between Milan. Novara and Varese, here it was that in 1919 Giovanni Agusta also settled, already at that time dose, in work, friendship and enthusiasm, to the man from Trent, Gianni Caproni.
It is easy to guess that enthusiasm for aeroplanes, in the Agusta family, was daily fare, served at breakfast, dinner and tea, only partly damped down by wife Giuseppina's anxiety.
At 19, Domenico was one ot the first to serve in the new Air Force, still at Malpensa. Then, all of a sudden, the shock. His father died from the after-effects of an operation in 1927 and Domenico took over the responsibility for the firm, together with his mother.
The fall-off in aeroplane construction in the post-war period allowed for little besides overhauls and repairs. Young Domenico Agusta learned in these uphill conditions to be a leader who knows how to keep in touch with his collaborators, who knows how lo get people to follow him in a work tempo without rest.
Around 1932-33, while aircraft construction was picking up again, the first experiments in the helicopter field were made. A few years later, in 1936, a single-seater louring monoplane, the AG 6, was already applying the principles of the fan wing.
Domenico Agusta and his company, leadership of which he shared with his mother, a woman of ability and courage, played an important part in post-war aeroplane production.
In the years following the war - after destruction and the prohibition to work in aviation - Domenico Agusta decided to turn to manufacturing motor-bicycles. In 1945 the Meccanica Verghera company carne into being, but two years before a two-speed 98 cc light motorcycle had already been made: the first to be rolled out in big numbers. Since then the MV models have taken over Italian roads while, under Domenico's direct guidance, racing motorcycles were winning competitions and championships.

In 1951 only one big shed was available for starting up work on aeroplanes again. In 1952 the agreement was signed with Bell for production under license of model 47G helicopters. In May 1954 the first of these helicopters constructed in Italy new at Cascina Costa. Larry Bell, founder of Bell Aircraft was present and celebrated with the whole Agusta family. From the destruction and void of the years just after the war to the advanced technology of rotary wing craft, there is no small distance and Domenico Agusta flung himself into it. He had alongside him his mother, Giuseppina, whom he was to lose shortly after, and his three brothers. The bond uniting them was always one of mutual and quite exceptional affection and family unison. In 1956 he already saw his hundredth helicopter built, while at Cascina Costa the four-engined AZ.8 grew out of the original AZ.l twin- engine transport project; here enthusiastic work by Domenico Agusta blends with Engineer Filippo Zappata's.
The AZ.8 made its first flight in 1958, the year that in addition to the AB-47G's, the new models AB-47G-2 and AB-47J were being constructed, and were making a name for themselves in Italy and even more so on markets abroad. That was the year when Domenico Agusta was made a Cavaliere del Lavoro: is was more than thirty years since he had taken over leadership of the firm, but still more than ever at a stage of growth in the development of his activities.
In the helicopter field, in fact, in addition to line production, original prototypes were already becoming a reality, in the hands of a technical department which Domenico Agusta was building up as the heart of the company. In 1959 the Agusta 103, single-seater for training, reconnaissance and agricultural work started flying. In 1960 the Agusta 102 ten-seater was the first Italian helicopter to get its certificate. Aero-engines GA 40 and GA 70, in horizontal and vertical versions for fixed wing craft and for helicopters, were built.
In 1961 line production started on the first turbine helicopter, the AB 204B, and, while the firm was expanding at quick tempo, in 1963, one of the most meaningful milestones was laying the foundations of Elicotteri Meridionali S.p.A. , a new company Domenico Agusta wanted to set up to contribute towards development of the Center-South of Italy.
In 1964, the big Agusta 101G tri-turbine 38-place helicopter flew at Cascina Costa: an all-Italian creation, and one of the most challenging rotary wing craft ever built any where. Around this time in addition to various experimental craft like the Agusta 104, 105, 105B and 115, the ASW version of the A B204 was being developed, several years ahead of similar programs now under way in various parts of the world for helicopters carried aboard ship.
In 1965 production started up on the 15- place A B205 turbine helicopter, which had also a twin-engine version. In 1967 production was started on the light turbine AB 206 Jet Ranger helicopter, as well as on the Agusta-Sikorsky SH-3D ASW helicopter for the Italian Navy, and also for the Navy the single-seater weapon carrier A 106 was also developed. At Frosinone work started at the Elicotteri Meridionali Company, officially opened in the month of October.
In 1969 carne another important moment in the firm's commitments: it look over a sizable share in the setting up, with the Iran Imperial Government, the Iranian Helicopter Industry Co. of Tehran, where facilities were built at the Mehrabad airport. Some months later a holding was acquired also in the Siai Marchetti company.
In 1970 the Government appointed the Agusta Company leading contractor for production of the 44-place Boeing CH-47C helicopter for requirements in Italy and abroad, with Elicotteri Meridionali, which held the manufacturing license, as well as other Italian companies, sharing in the enterprise.
At Cascina Costa to production of the other models twin-engine AB 212 was added and the fast twin-engine Agusta 109C, the compound Agusta 123 and the Agusta 120B helibus were all being worked on. February 2, 1971, unexpectedly, Domenico Agusta passed away, aged only 64, his wife Claretta, his daughter Giovannina, his younger brother Corrado beside him, in des- pair; remembering his lost brothers: Vincenzo who died in 1958, Mario in 1969.
Domenico Agusta's worldly existance has come to an abrupt end, at the height of his activities, in the fullness of his career, with- out his showing even the slightest fall-off in the working tempo kept up over the span of 44 years at the helm of the company, with whose story the story of his life was wholly fused. 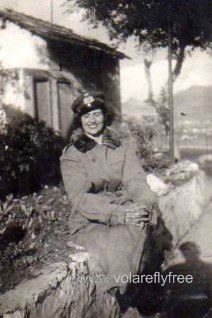