DOMENICO AGUSTA A lesson in achievement.
The experts say, and facts generally confirm, that aircraft industries can prosper only with appropriate government assistance, and where there is sufficient home market support, both military and commercial.
Such basic premises are contained in official reports, and it is a fact that throughout th world the nations possessing a viable aircraft industry can be counted on the fingers of one hand.
In postwar Italy, Domenico Agusta found no such premises ... he could rely neither on government support nor on any market of noteworthy proportions.
As to forecasts and experts' reports, he had no time to read them, and if he had he wouid have paid scant attention to them.
In a skeptical and disinterested country, he nevertheless built up an advanced and aggressive aircraft industry which has during the past 20 years developed suffciently to compete successfully in th world markets.
Thus did Domenico Agusta demonstrate, against ali prevailing opinion, that he could stand with out "official" or "unofficial" government subsidy.
"This man is demonstrating that it is possible to sell pineapples grown in th Antarctic snows exclaimed a prominent American businessman. Discounting th cxaggeration of the "bon mot" , there in variably remains an element of justifiable amazement, and a kernel of truth.
To say simply that Domenico Agusta's success was based solely upon the success of the helicopter is to say that air is transparent, or that grass is green.
That is to say nothing. He could have had an equal or perhaps even greater success in almost any other venture, as in fact he had during a quarter century in his very personal and absorbing hobby of motorcycle competition racing.
It would be unfair and irrelevant to reduce everything to terms of production prowess or merchandising success because it is not like that.

Machines produced, sold, and exported constitute the most striking and irrefutable testimony of success which is recognized by all.
Not so widely recognized, however ... cxcept by th few in the business ... is the tremendous personal effort contributed by Domenico Agusta before the point of series production could be attained.
In 20 years, from almost nothing, and with almost no outside assistance, he created an impressive complex of experienced personnel and specialized tools which now is entirely competent to independently undertake the design, testing, and production of new rotary wing aircraft.
There is an important point here upon which one must pause and reflect if we are to clearly illustrate the true stature of the man.
Twenty years ago, he undestood a fundamental condition which others oniy now are recognizing, and which stili others may never understand, namely, that post war aviation had entered a period of radicai evolutionary change. The romantic concept to which we largely owe th conquest of th sky, was imperatively taken over by th requirements of flight safety.
There ended the era of extemporary discovery, of ingenuous invention, and said with some reverence, of the old and extravagant airplane.
Also ended was th image of th glorified pilot and designer who gave their name to new aircraft designs and innovations. Those were good times, but everything passes in this world.
Now entering the scene were scores of previously unknown technicians, associated specialists, brain trusts. standardization of flight procedures, experimental tooling, quality controis, and computers. A pre-war generation of flamboyant high-living pilots and designers was succeeded by a corps of erudite and hard-working men.
Let us make it clear: Domenico Agusta tended to remain faithful to his early collaborators, th unforgettable companions of his youth.

On rare occasions when he could relax among his friends he would reminisce on the subject closest to his heart - the golden period of the pioneer discoveries of the skies.
But, the next day, with full know- ledge of modern flight safety concepts, he was ready to suspend any pilot who dared to perform an unncessary acrobatic stunt. Today, many people speak of "technological gap" in the manner of a famous politician. But, Domenico Agusta, probably without being conscious of a "gap" , began filling it 20 years ago. From the era of wooden and cloth airplanes which ended with the holocaust of Italian aviation in 1943, to the complex metallurgy of a 1950 helicopler ,the technieal gap was in fact a large one.
The quickest and most logical way to close this gap was not to invent the umbrella, or to just invent and design.
Design what? And for whom it one did not even know how far others had gone? And what to invent when even, the manufacturing techniques were unknown? Few people in Italy realized and understood the vital difference between design and manufacturing processes - between the initial design concep of a modern aircraft and the capacity to build it in terms of the advanced manufacturing technology required.
Domenico Agusta had the intelligence and the humility - two interrelated virtues - to return to school 20 years ago along with his technicians, with an obstinate resolve to learn everything, and thus be able to do everything, even though it may have been much easier and certainly more convenient lo obtain many items elsewhere.
His unflagging and ceaseless dedication to acquiring new knowledge, a goal obviously conceived and implemented as pari of long range planning, had two important results: a thorough knowledge of rotary wing technology, and complete, up-to-date tooling to utilize the technology, both for research and for production.
These two conditions were indispensable to the final objective: to acquire the capacity not only to design and test new aircraft, but also to have them accepted in the world market.
One of the most interesting aspects of this long 20 year march was the fact that Domenico Agusta, this man of another era, refused simply to rely on laboratory results or to accept the "test tube" concept. Instead, he insisted upon the real thing. In other words, in order to learn, and to teach his technicians the art of designing and testing new helicopters, he forced them to build. new helicopters.

We believe that there is in the world no better example of an aircraft monufacturer who in the relatively brief span of 20 years, at his own expense, has flown a dozen prototypes of originai design, ranging from a small, single seater to a large 3-turbine helicopter of 40 seat capacity. With the exception ot the latter machine, and the small A-106 anti-submarine helicopter now in service with the Italian Navy, all the others were developed at the company's own risk and expense - as th Americans would say, "private venture" .
Contrary to what some might suppose, it is not a case of unsuccessful designs since some were successfully flight tested for military and civil certification.

The point is another. As we have said, time and aviation had changed from the rash activity of pre-war days to the sophisticated design approach of th post-war period.
Domenico Agusta understood also that in a market tending toward standardization, and in the face of rising costs of development and production, it was not sufficient to have in hand simply a good machine to conquer the market.
He understood that it took proper timing to enter the market, to fill a specific gap, that these also are essential considerations in determining the risks involved in making a commitment to production.
In this rather long discourse, we have touched upon three important factors: specialized tooling, design studies in depth, and manufacture and testing of new vehicles. These three factors in any other country possessing an aeronautical industry are done largely at government expense. In Italy, instead, everything was accomplished at the risk and expense of the Agusta company, and the merit for this is due entirely to Domenico Agusta.
Italy did not have a helicopter industry.
Now it has.
It did not have trained technicians capable of servicing aircraft created by others, not to mention the capability to manufacture an Italian aircraft.
Nor did Italy have trained experimental test pilots capable of flight testing new rotary wing aircraft. Now, it has all of these. Italy did not have the possibility or even the hope of entering the world market competition under its own insignia and its own flag. Now, this prospect exists, and is being realized.
It is not recorded that Domenico Agusta ever expressed these ideas or plans, though they were very clear to him, before any symposium or any public meeting. Like Socratcs, he imparted his ideas oniy to his own students of his private and modern academy - his technical associatcs of Cascina Costa, leaving nothing in writing except a brief testament: When I die, place my coffin among the machine tools, the instruments of our work. Give me a simple furieral and this is my last order - the next day, everyone back to work! . This is the great lesson of Domenico Agusta, the lesson of achievement. We have mentioned above, a man of another era . We should not like lo be misunderstood.
A man who manufactures helicopters cannot be other than a man of these times. But, he could not have accomplished all this without possessing certain virtues which now seem to be disappearing - great moral strength and great courage, a strong will to pursue his objectives, a clear vision of the problems to be surmounted, and above all, a deep understanding of his fellow-men which is, after all, the fundamental qualifcation to lead other men.
He who understands everything can forgive everything. He used exhortation, understanding, persuasion, and forgiveness as the principal instruments of his rule. He demanded from everyone the impossible as well as the possible. He did not, of course, always gain these objectives, but he himself was a living example of this daily and amazing "impossible" .

Confronted with some of his orders, it was at times possible to eat your liver out as frequently happened - but only to end up completely disarmed by his own indefatigable example.
One could even argue with Domenico Agusta, but only on the manner of performing a job, and never for personal reasons. One could argue for hours, but it was virtually impossible to leave the table at the end of the discussion with any feeling of resentment, or of hearing a grudge. He had an incomparable way of closing even the fiercest of discussions with the genuine, open smile of an adolescent.
He had the humility and charm to dispel any cloud. With the blessing of this smile one couid sleep the night through only to wake the following morning feeling that perhaps Domenico was right - and 9 times out of 10. he was.
This calibre of man, of another era - and this is the point - could have been anything - a military leader, a navigator, an artist - who knows? - even a prophet. Such reflections surely would have amused him. Rather, helicopters. Well, this comes from another of his particular characteristics: he had great regard for other men, as well as a profound respect for tradition, for all those who had preceded him in this worid. His father was a pioneer in aviation, and Domenico felt himself to be a link in the chain of the dynasty. This was not limited to his immediate family, but in a larger sense, extended to being faithful to the principles and objectives of others who had gone before him - to his comrades of Malpensa who had persevered, and to whose principles he was committed with all his strength and energy to continue - so that others who followed might carry forward his banner. It is quite likely that even in his projections of the future, this extraordinary man of so many incredible aspects, will also be right. L.C. 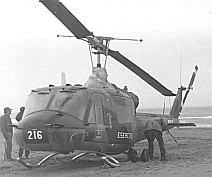